The French Cartographer Who Stowed Away to Sea 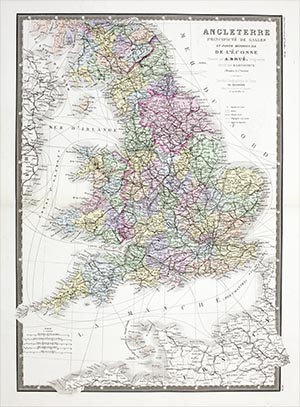 Adrien Hubert Brué – Angleterre, Principaute de Galles
Click Image for Full-Sized MapWhilst little is known of Brué’s life and no known images of him survive, his influence was undoubtedly significant. Alexandre von Humboldt, the President of the Société de géographie de Paris praised the accuracy of his work and “clarity that is all the more pleasing to the eye” and the 1825 edition of the Brockhaus Conversational Lexicon (a German language encyclopedia originally published in Leipzig) referred to him (along with his contemporary Pierre Lappie) as “best drawing geographer of France”. By the time he died in 1832 in Sceaux, France, Brué held Membership of the Société de géographie de Paris, was a Friend of the Royal Geographical Society in London and held the post of Geographe du Roi (King’s Geographer).
Born on 20th March 1786 in Paris, nothing is known of his childhood. The first we hear of Brué was that he was discovered aboard the ship ‘Le Naturaliste’ which, along with its’ sister ship ‘Geographe’ made up the explorer and cartographer Nicolas Baudin’s expedition to Australia to survey the coastline. Brué was 15 at the time and the fact that he was discovered on 19th October 1800 after the ship had departed from Le Havre as opposed to before it departed may well have been the defining moment in his life. He was named ‘Novice First Class’ and spent the expedition working under the navigator Louis Le Freycinet before returning to Paris in 1803 and continuing to work under Le Freycinet assisting him and Francois Péron (who was also on the Baudin expedition) in creating a nautical chart based on the surveys they had made. 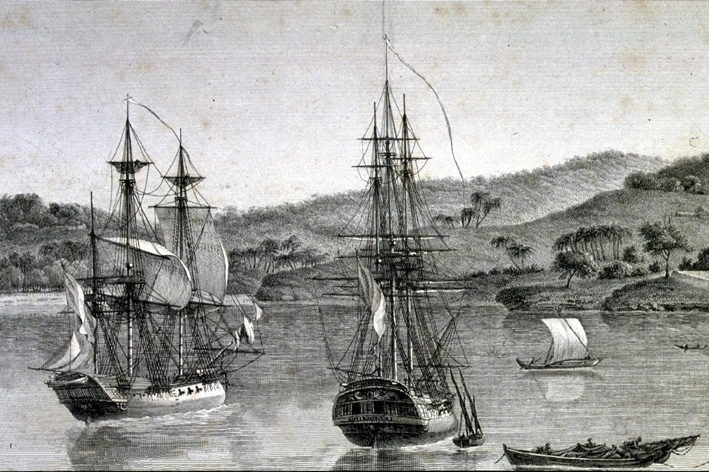 Le Naturaliste and Le Geographe – The Ships used on Baudin's expeditionBrué’s course was set and in the years that followed he immersed himself in all aspects of cartography and also traveled extensively; visiting South Asia, the West African Coast and the North Sea. His reputation continued to grow and the years 1810 to 1830 saw him established as one of the most important French cartographers and it was during this period that his two most important works were published: Grand Atlas Universel in 1815 and Atlas Universel in 1822, which ran to several editions. Atlas Universel was published as a continuation to Grand Atlas Universel.
What characterized Brué’s maps or ‘cards’ as they were referred to at the time, was the high degree of accuracy with which they were produced and the meticulous attention to detail employed in their crafting. This was possible due to Brué’s application of copper plate intaglio to the process of mapmaking or, as Nouvelles Annales des Voyages et des Sciences Géographiques had it: “by applying to the making of cards this ingenious process of drawing on copper itself”. 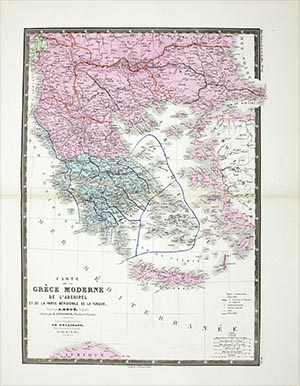 Adrien Hubert Brué – Carte de la Grece Moderne
Click Image for Full-Sized MapBrué was also remarkably unsentimental about his maps and was quick to respond to the new knowledge and discoveries of others and incorporate this into his own work, replacing old maps with updated versions when new knowledge came to light. This, it transpired, whilst scientifically astute was poor commercial thinking as people were reluctant to spend money to buy maps that were likely to be replaced in the next edition of the Atlas.
Nevertheless, praise from contemporaries was warm and expansive. Perhaps the most telling recognition of Brué’s talents was that of Alexandre Von Humboldt himself who, in his Report to the Academy of Sciences of Paris for the meeting of January 19th 1824 was effusive in his praise of Atlas Universel: “Everywhere the author has taken the greatest care to accurately represent the sinuosity of the coast and the relief of the country. The dividing ridges, the plateaus, the slope of the unequal mountains on both sides, are expressive with a clarity that is all the more pleasing to the eye, that the space is very small, and that the work of the chisel does not hurt not reading the name.” He adds: “Maps of Switzerland and Spain deserve, in terms of Physical Geography, the attention of those who know the most difficult kind of drawing.” 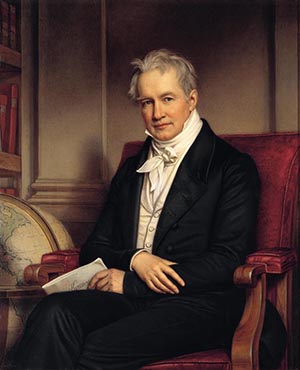 Alexandre Von Humboldt – 1843Sadly, Brué’s career was not destined to be a long one. Cholera was prevalent at the time and in 1830, his health failing, he retired to Sceaux, a small town to the south of Paris, and died of Cholera there on 16th July 1832.
Had he survived, who knows what he might have achieved. He left a number of unfinished works behind including a much-anticipated map of South America. He had also proposed a large map of Africa updated with all the most recent discoveries.
After his death Nouvelles Annales des Voyages et des Sciences Géographiques noted his “…real passion for science which was to illustrate his life. ” and went on to describe him as “…a zealous friend of science, a profound and passionless critic, always ready to throw light on the discussion of his intelligence and filled with kindness for his colleagues”.

This website uses cookies to improve your experience while you navigate through the website. Out of these cookies, the cookies that are categorized as necessary are stored on your browser as they are as essential for the working of basic functionalities of the website. We also use third-party cookies that help us analyze and understand how you use this website. These cookies will be stored in your browser only with your consent. You also have the option to opt-out of these cookies. But opting out of some of these cookies may have an effect on your browsing experience.
Necessary Always Enabled
Necessary cookies are absolutely essential for the website to function properly. This category only includes cookies that ensures basic functionalities and security features of the website. These cookies do not store any personal information.
Non-necessary
Any cookies that may not be particularly necessary for the website to function and is used specifically to collect user personal data via analytics, ads, other embedded contents are termed as non-necessary cookies. It is mandatory to procure user consent prior to running these cookies on your website.
SAVE & ACCEPT