How to Buy Old Maps

What to Look for When Buying an Old Map

Buying an old map should be a straightforward task. The vast majority of map sellers are honest and ethical people and fakes are actually a rarity. There are, however, a few simple measures you can take when you buy old maps and these will help verify the authenticity of the map you wish to purchase. Please bear in mind that we guarantee the authenticity of all antique maps sold by Mapchest.co.uk.
In order to geta better understanding of the subject, we spoke to Graham Whitford of Cormelian Maps. Graham has over 20 years experience sourcing original antique maps and agreed to share some of his insights with us.

Determining authenticity is a cumulative process
Confirming that your map is genuine is a cumulative process. Few, if any of the characteristics outlined below, will be deal breakers in and of themselves, but if the original you’re about to buy displays a number of these traits it might well be worth investigating a little further.

It’s in the paper!

Laid paper frame marks, seen in this image as light vertical lines, developed as the paper was drying on its frame.Nearly anything pre c. 1750 and many maps up to the early 1800s will most likely have been printed on hand made, ‘laid’, paper. ‘Laid’ refers to the papermaking technique that existed up to that time whereby layers of pulp were laid one on top of the other atop a wireframe or grid. Laid paper will feel noticeably rougher than modern paper. Not super rough but certainly not glossy and smooth like much of the paper we use today, so you need to look at the texture and if possible feel it as well. Another tell-tale sign of laid paper is the frame marks. If you hold a laid paper map up to the light you should be able to see the faint lines (about an inch apart) left by the frame as the paper dried.

Old Maps Age
Okay, so it’s not exactly the most earth-shattering of revelations, but if you’re looking to buy old maps then the map you’re buying should have aged. Knowing what to look for in terms of ageing is a great help in confirming that a map is genuine. Something to look out for is ‘foxing’. ‘Foxing’ refers to slightly darker areas on a map where the paper has oxidised due to contact with the air and, as an aside, the word derives from the reddish-brown ‘fox fur’ colour of the marks.

Of course, digitisation techniques are now so advanced that all visual clues to authenticity can be reproduced, indeed, if you buy a printed reproduction of one of our original maps it will often include some of the characteristics outlined above. So in order to distinguish an original as opposed to a good reproduction masquerading as an original we need to delve deeper.

The telltale signs of engraving

Pre 1750 and indeed, up to the early 1800s maps were made by engraving. The map itself was engraved (in reverse) onto a metal (usually copper) plate. The plate was then inked and wiped so that the surface was clean but ink remained in the grooves. It was then pressed down hard so that the paper would be forced up into the grooves caused by the engraving and so absorb the ink.

The “plate mark” shown here can usually be felt as a slight depression in the paper.One of the side-effects of this process was that maps produced in this way tend to have a ‘plate mark’ surrounding the printed area. A plate mark is a slight depression in the paper, normally accompanied by a visible line, where the metal plate has pressed down onto the paper and can usually be felt as a slight ridge around the edge of the map. A good reproduction will show the plate mark. On an original, you should usually be able to feel it as well.
It’s also worth bearing in mind that copper was an expensive material and an engraver would generally try to utilise as much of the plate surface as possible. This meant engraving close to the plate edges and so, a large gap between the edge of the printed area and the plate mark can be an indication of a reproduction although it’s important to remember that this wasn’t universal and some genuine originals have a large gap.
If the printed area extends beyond the plate mark though then you almost certainly have a fake on your hands.

Your map most likely started off in an atlas
Many, in fact, the majority of antique maps on the market today were originally published in atlases and this fact presents us with more ways of determining a map’s authenticity (or lack thereof). We mentioned foxing earlier on and how it is the result of oxidization from exposure to air. Most maps which started life in atlases will rarely have been in contact with the atmosphere except around page edges and at the spine. Therefore a certain amount of uneven browning around the edges is a good indication of authenticity when you buy old maps. 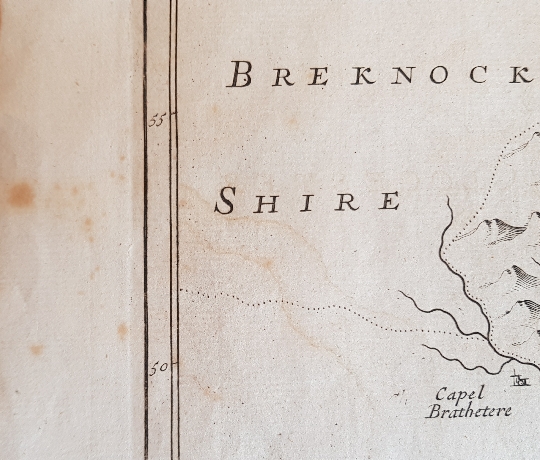 Example of “foxing” caused by oxidization.
Similarly, a fold down the centre of the page is another good indication that your map is genuine. Many of these maps originally occupied two pages of an atlas which would have been closed most of the time causing a fold mark. A central fold can cause an extremely thin gap allowing air to enter. Over time this can cause a very slight darkening.
Another sign of authenticity deriving from the fact of the map originally being in an atlas is slightly more obscure. If you think about it, most atlases feature either a map of the world or of the country where the map was printed near the front. It follows therefore that such maps from atlases should show more signs of ageing due to exposure to light and air, not only foxing but colour fade as well (see next section). Finally, atlases were read and pages turned. Scuffing of the top right corner is a good clue as to authenticity.

Colour quality
Colouring of maps was often done by hand at the same time as the map was printed. Some were coloured in the subsequent few years but both of these scenarios can be classed as contemporary colouring’.
Paint pigment fades over time with the kind of organic pigments historically used in colouring maps the most susceptible. If you buy old maps you should expect the colours to be faded to some degree. The amount of fading will, of course, depend on various factors such as how the map has been stored and pigments used.
It’s worth noting though that different colours of pigment fade more quickly than others and that red fades notably faster than the others. An original map on which the reds are bright has possibly been retouched at a much later date and thus would not qualify as “contemporary colouring”.
A magnifying glass may reveal brush marks in the colouring. You may also notice where the colourist has lifted the brush to refill and continue a line. You may also be able to feel the slight unevenness between uncoloured/coloured sections. Some colourists were highly skilled and their work is much smoother and cleaner.

Does the date match the address?
Cartographers tended to move premises fairly frequently and it’s often possible by looking in reference books to work out where a particular cartographer had their premises at a certain time. They would also often include the address of their premises on the map itself. If the address does not correspond to the date then your original map may not be what it seems.

Be wary of framed originals
This is something of a no-win situation for the map seller. It’s perfectly understandable that they would wish to protect their maps from being prodded and poked by people all day long, at the same time, things like plate marks and paper texture can only truly be determined by touch. If you have any doubts as to authenticity when you buy old maps you should ask to be able to check the map by feeling it.
So there you have it. It should be noted that few if any of these characteristics taken in isolation are conclusive evidence that your map is not genuine. Some old maps are beautifully preserved, some laid paper was smoother than other laid paper, not all were exposed to light and so not all the colours faded and some plate marks are more apparent than others. You should look at all of the above as a cumulative process though and the more of the outlined traits present, the more chance that the map is not an original.

Finally, as Graham says, “You just know” – trust your gut instinct. As with most things in life, if it seems too good to be true then it probably is.

Grateful thanks to Graham Whitford of Cormelian Maps for his insights. To browse Cormelian’s collection please click here.

This website uses cookies to improve your experience while you navigate through the website. Out of these cookies, the cookies that are categorized as necessary are stored on your browser as they are as essential for the working of basic functionalities of the website. We also use third-party cookies that help us analyze and understand how you use this website. These cookies will be stored in your browser only with your consent. You also have the option to opt-out of these cookies. But opting out of some of these cookies may have an effect on your browsing experience.
Necessary Always Enabled
Necessary cookies are absolutely essential for the website to function properly. This category only includes cookies that ensures basic functionalities and security features of the website. These cookies do not store any personal information.
Non-necessary
Any cookies that may not be particularly necessary for the website to function and is used specifically to collect user personal data via analytics, ads, other embedded contents are termed as non-necessary cookies. It is mandatory to procure user consent prior to running these cookies on your website.
SAVE & ACCEPT